She rises from the ashes, to fearlessly proclaim the exclusive right she has on her body and the decisions involving it. Yes, you would not want to miss the chance to be inspired, by the elevating story of girls belonging to a tribal community in Kerala.

The fascinating story is brought to us by ‘Dhabari Quruvi‘, the first film in the history of Indian cinema to star only people from indigenous communities. Directed by National Award-winning filmmaker Priyanandan, the film also has the distinction of having been shot completely in the tribal language of Irula.

The film is being presented at the 53rd edition of the International Film Festival of India, which is set to open in Goa on 20th November, 2022. And yes, the 104-minute-long feature film is all set to have its world premiere in the Indian Panorama section of IFFI. 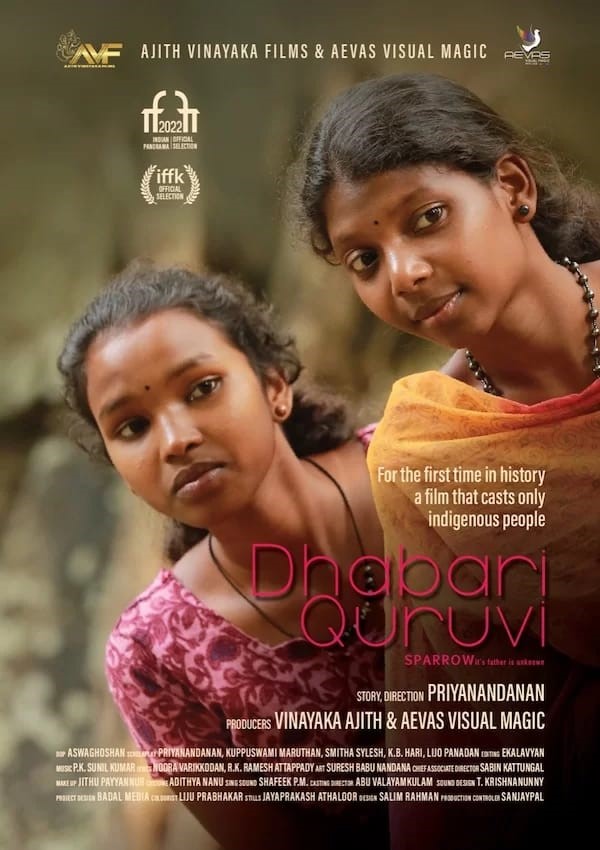 Portrayal of indigenous people in Indian cinema has often been criticised for its failure to look beyond stereotypes. Amidst a cinematic tradition and culture which may not have done justice to the true identity and culture of tribal peoples, Dhabari Quruvi is expected to stand out as a candle spreading founts of newfound hope and inspiration. Set against the background of tribal rituals and culture, the film invites viewers to join the tempestuous journey of a tribal girl as she battles convention and seeks to free herself from the chains with which society had tied her lot.

In Irula language, Dhabari Quruvi means ‘a sparrow with an unknown father’. The mythological bird, which is part of the tribal folklore, captures the untold tales of the unseen people who suffer quietly, who yearn to break the shackles of injustice, whose agonies and struggles the film seeks to bring to light.

So, who are the actors who bestow the film with the honour of having a unique star cast? They are around sixty people, belonging to Irula, Muduka, Kurumba and Vaduka tribal communities of Attappadi, a scheduled tribe hamlet of the southern Indian state of Kerala. Quite a few of them had not ever seen a film in their entire life.

The actors were selected from an acting workshop conducted at Attappadi in which around 150 people participated. Meenakshi, Shyamini, Anuprasobhini and Muruki play main roles in the film. The cast also includes Nanjiyamma, the tribal woman from Attappady who got the 68th National Film Award for Best Female Singer last year.

Dhabari Quruvi has bagged URF world record for being the only feature film starring only tribals. The film has also been selected to the International Film Festival of Kerala.