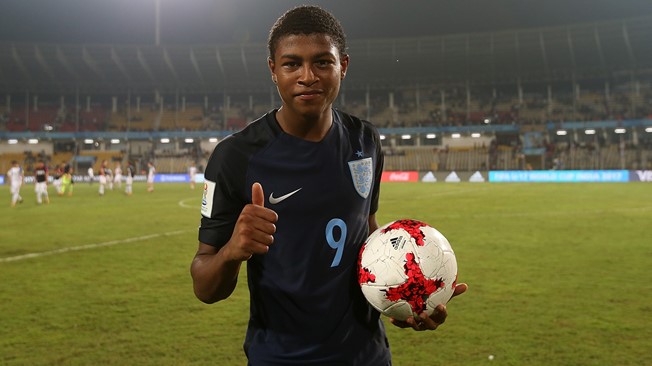 Madgao: 21/10/2017 … Before Saturday’s quarter-final in Goa, the third quality on that list was not one that could immediately be attributed to Rhian Brewster’s displays at the FIFA U-17 World Cup India 2017. Against USA, however, England’s no9 seemed all of a sudden to have found his shooting boots again. “as he scored a hat-trick today!” in England’s 4-1 victory over USA.

The Liverpool forward scored three and assisted another, as the Three Lions saw off the Stars and Stripes to reach the semi-finals of the U-17 World Cup for the first time. Holding the match ball and wearing a wide smile, he continued: “I’ll be taking this home. First, I’ll let the lads sign it and then I’ll get it framed.”

Brewster’s goal tally for the tournament has now risen to four after a performance that showcased his array of striking talents. For his first goal, he was positioned exactly where a goalscorer needs to be to stab in a rebound. For his second, he showed the defender a clean pair of heels and chipped in a clever finish. He then set up England’s third by starting the move in his own half and ending it with a perfect cross for his team-mate. For the fourth goal, he could only be stopped illegally. After winning the penalty, he converted it himself…… Courtesy: FIFA.com