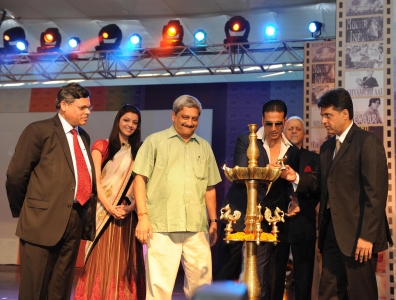 The IFFI  took off to a grand start today with Bollywood superstar Akshay Kumar inaugurating the cinematic extravaganza that celebrates the 100 years of Indian cinema over the next 10 days.

Recalling his early connection to cinema and how his family skipped meals to buy movie tickets, the 45-year-old actor said it was incredible that the country was celebrating the 100-year-old cinematic legacy at IFFI.

“When I was a kid every weekend me, my sister, my mom and my day, we would go without lunch every single Saturday of every month so that at night my family could afford four tickets and four samosas and four mango stick ice creams,” Akshay said.

The 45-year-old actor said it is because of his father that his choice of movies largely depend on what the masses want.

“Religiously to this date I treat my family on Saturdays but fortunately I don’t have to skip lunch… It is our biggest connection in life. So I owe my entire life’s happiness to Indian cinema,” Akshay said.

Polish director Krzysztof Zanussi, 73, received a standing ovation from the audience as he was conferred with the Lifetime Achievement award by Information and Broadcasting minister Manish Tewari.

In responsne to the emotional appeal made by Akshay, the whole audience stood up in two-minute silence to pay tributes to the film personalities who passed out this year as well as Shiv Sena Supremo Bal Thackeray.