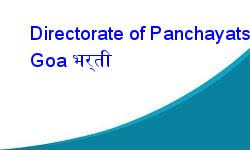 Panaji: Jan. 25, 2019The Constitution Week was celebrated at Bardez Taluka level. To mark the celebration, the Directorate of Panchayat in association with Sucuro Village Panchayat organized a function at Socorro Bardez today. Prof. Suchita Timble of V. M. College of Law was the keynote speaker  for  the function.

Smt. Timble speaking on the occasion said that with the enforcement of the constitution on January 26, 1950 India become Sovereign, Socialist Democratic country. We Indians are empowered to rule ourselves. The constitution has made us privileged society and a largest democratic nation in the world.

Smt. Timble further said that being citizen we have to know basic things of our constitution. Our constitution has granted us fundamental rights along with duties. The Constitution adopted one vote one value. All are equal before law. The country is responsible for the welfare of every citizen irrespective of his religious affiliations, caste creed and gender Therefore we are a welfare nation. She appeal to the people to learn about  constitution.