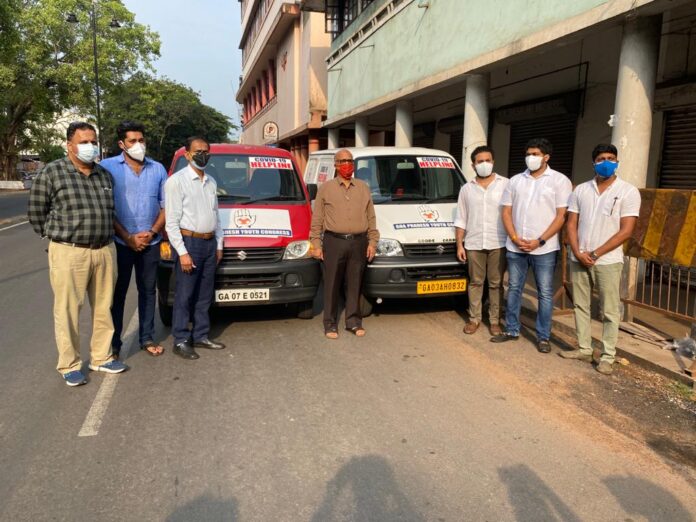 : The Goa Pradesh Youth Congress, expanding its services to help COVID patients, on Friday launched two vehicles to pickup COVID patients from Homes and to carry Oxygen Cylinders in hospitals.

Margao MLA Digambar Kamat praised the work of Youth Congress, saying they are helping people during the tough times. “Goa is reeling into COVID crisis, but the BJP government has made no efforts to ease and control the situation. Many senior citizens are looking for help to visit hospitals, as they have no one to take their care. In this case, Youth Congress has become a ray of hope.” Kamat said.

Kamat said that saving the lives of people should be priority, in this COVID situation.

Chodankar said that Youth Congress has set an example of humanity by providing Oxygen to people irrespective of political affiliations. “Youth Congress has helped many supporters from other political parties. Our motto is to save the lives of people.” He said.

Chodankar has appealed to people to help the initiative of Youth Congress to break the chain of COVID.

Youth Congress has given a breath of life to many patients in the last fifteen days, by providing them Oxygen Cylinders at hospitals, as the government failed to arrange the required capacity of Oxygen in the hospitals. “The failure of this insensitive BJP government to arrange Oxygen was exposed by a team of doctors, who were helpless due to non-availability of the same. When we tried to provide Oxygen cylinders to the patients, this same incapable government harassed us by summoning us at police stations to enquire about from where we purchased these cylinders.” GPYC President Adv. Varad Mardolkar lamented.

“If this government is allergic to seeing Congress working for the people and COVID patients, then it should itself make efforts to cater people’s demand and if BJP can’t perform then it should accept it. They have no right to play with the lives of the people.” Mardolkar said.

Adv. Mardolkar said that this vehicle is launched with the purpose that Oxygen cylinders could be transported safely and systematically. “People can call us at our helpline numbers and we will try to reach at earliest to the hospital where the patient is admitted. Our motto is to give breath of life to patients and save their lives.” He said.

Apart from this, Youth Congress has also launched vehicle to pick up poor and needy patients, also senior citizens, from homes and take them to hospitals for early treatment. “Recently we received many calls saying ambulances are not available and hence to make arrangements for vehicles, which we did while attending such calls. But now we felt to have special vehicle for this cause. Presently this vehicle service will be available for North Goa and later we will expand it in South Goa.” Mardolkar said.

Adv. Mardolkar said that there are many families who don’t have vehicles and hence find it difficult to reach hospitals. “We will sanitize the vehicle after every use and will try to give good service.” He said.