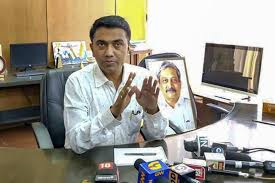 Panaji, March 22, 2020  … Chief Minister Dr. Pramod Sawant has appealed Goans to avoid mass gathering as a precautionary measure from spreading of the COVID-19, Chief Minister Dr. Pramod Sawant has asked the people of Goa to avoid mass gatherings in public places. “All the educational institutes in the state will be closed from Monday till March 31, 2020, however all the exams including the SCC Board will be held as scheduled. Spots such as Public Swimming Pools, Gymnasium, Casino, Spa, Cinema Halls, Cruises, Pubs/Discotheques will be closed from the midnight of March 15, 2020 to March 31, 2020,” the Chief Minister informed.

The Chief Minister was speaking at a press conference held at the Official Residence of the Chief Minister at Altinho today. Minister for Health Shri. Vishwajit Rane was also present on the occasion.

To restrict the entry of persons infected with Corona virus in the state, the Government will place Thermal Scanners, initially one each at the Airport, Marmugao Port Trust (MPT) and railway stations, the Chief Minister told. “The scanners will be purchased by the Government on priority to screen every individual entering Goa. Also, a fully equipped Virology laboratory will be set up at the Goa Medical College (GMC) so the state will not have to seek help from neighbouring states for early detection and tests regarding COVID-19,” the Chief Minister said.

Decision regarding Shigmo float parade which is yet to happen in few talukas in the state will be taken by the local Shigmotsav Committees, however, the Government appeals people to be safe, make use of sanitizers and avoid public meetings, the Chief Minister said.

He directed the Office of the Collector of both districts to not to permit any public meetings or gatherings pertaining to the upcoming ZP elections. “To maintain the hygiene at the election booth, the voters will be provided with hand sanitizers and the staff on election duty will be provided face masks. Hence, people need not panic. Do come to cast your vote,” the Chief Minister informed.

Dr. Sawant further urged the shop and pharmacy owners to stop stocking sanitizers or selling them at high price as malpractices like such will be viewed as a punishable offence as per the Advisory. He also urged the general public to adhere to all the Guidelines and Advisories issued by the Govt. from time to time for the safety of individual as well as the state. If any person suspects of infected with Coronavirus in the vicinity, they may call 104 helpline of the Government, the Chief Minister said.