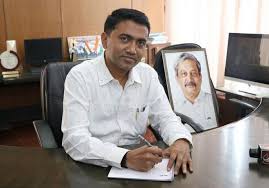 Panaji: August 29, 2019 …. The Chief Minister Shri Pramod Sawant has written to all the village sarpanchs in the state and has informed that the State Government has taken sincere efforts towards achieving the status of “Open Defecation Free” for all the Village Panchayats under the Swachh Bharat Mission (Gramin) Scheme of the Ministry of Jal Shakti.

As a first step towards achieving this status the work of installation of Community Toilets, wherever required, has been entrusted with the Goa Waste Management Corporation with a time line of 31/08/2019. The Directorate of Panchayats had already received application for construction of Individual Toilets for Households without toilets under the State Scheme which is also being taken up simultaneously though the priority now is to complete the Community Toilets for the purpose of achieving “ODF” status.

It will be a matter of pride for the State of Goa to achieve the ODF as Goa is one of the few States which yet to achieve ODF status. For achieving this feat | solicit the active support and cooperation of your Village Panchayat, the Chief Minister adds.