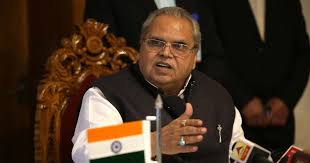 Panaji : March 20, 2020 … The Governor of Goa, Shri Satya Pal Malik felicitated Cadets of Karnataka and Goa NCC Directorate who participated in Republic Day Parade at New Delhi on January 26,2020 and secured fourth place in the event with cash incentives and certificate of appreciation at home function at Raj Bhavan yesterday.

The felicitation function was hosted by Governor at Raj Bhavan to acknowledge outstanding performance of NCC Cadets from Karnataka and Goa Directorate to boost their morale and Passion to strive for further excellence.

Speaking on the occasion Governor congratulated the NCC Cadets for their outstanding contribution and excellent performances in the Republic Day Competition held at New Delhi and hope that, similar commitment and efforts will be shown in personal career path by them.

Speaking further, the Governor said that NCC has moulded  youths to be disciplined and motivated human resource to take up leadership in all walks of life and lead the Nation to the pinnacles of glory and mentioned that growth of the Nation is directly related to the growth of the youth and said that, NCC Cadets have additional responsibility to helping others to be responsible citizens of the country.