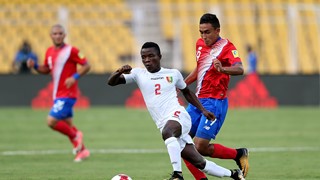 The early exchanges saw little in terms of action at the Pandit Jawaharlal Nehru Stadium, but that soon changed with two goals in four minutes, starting with Costa Rica taking the lead through a Yecxy Jarquin tap-in on 26 minutes.

The central American’s opener prompted a reply from Guinea, who finished the opening half as the stronger-looking side. They levelled matters on the half-hour mark through Fandje Toure’s second goal of the tournament.

Le Syli Cadet picked up where they left off after the break and created several chances to take the lead, but against the run of play, it was Los Ticos who restored their lead through a somewhat fortuitous Andres Gomez header on 67 minutes.

However, the Africans would not be denied and they equalised in the late stages, as Ibrahima Soumah powered home a fierce strike to earn Guinea a share of the spoils. It was the least they deserved for their efforts that included 42 attempts at the Costa Rican goal during the match.   Courtesy:FIFA.com