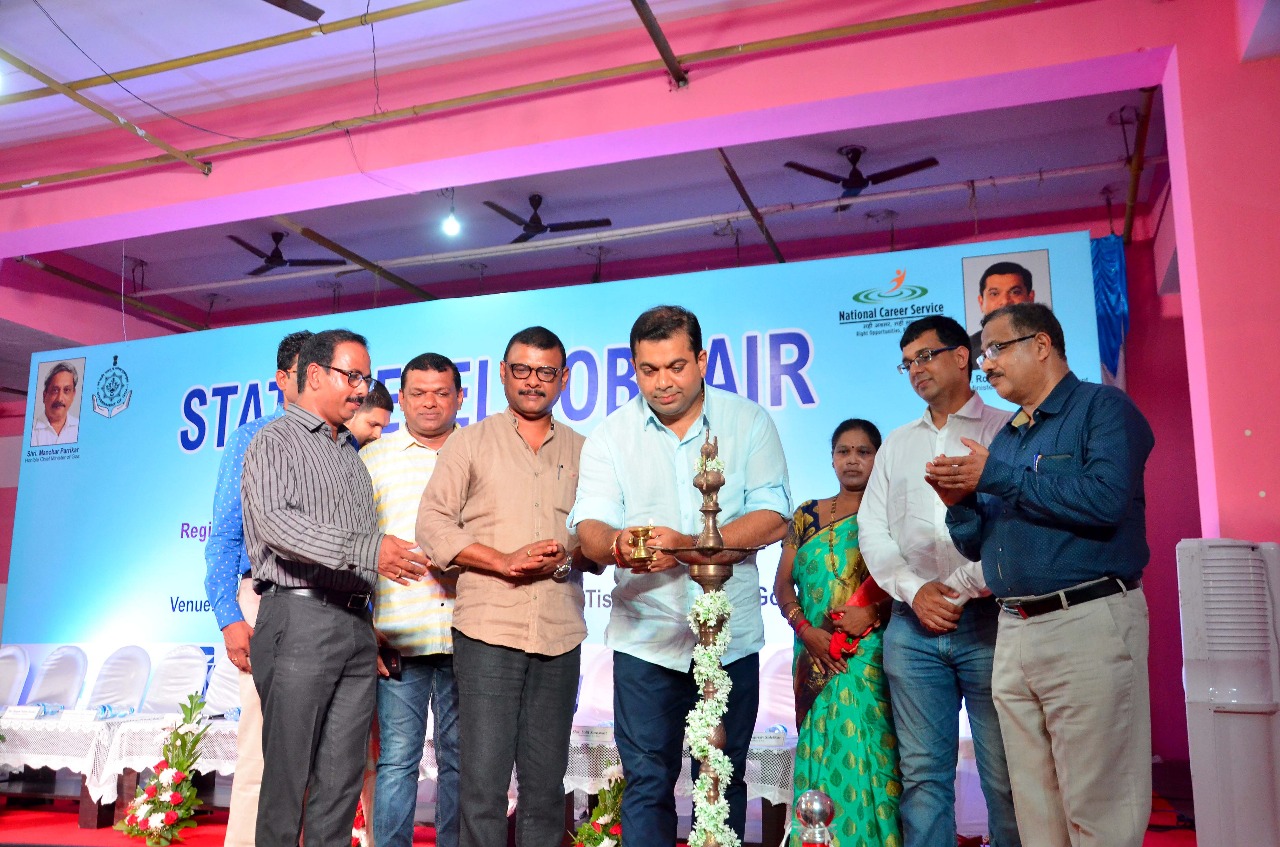 Margao:  June 02, 2018 …. The sixth State Level Job Fair was organised at Shreesthal Hall Sanvordem by the model career centre of Regional Employment exchange under the office the commissioner of Labour and Employment.

In his inaugural speech Minister Khaunte said that the Government is aware about the problems faced by mining effected people and it is leaving no stone unturned to restart mining activities in the State. The job fair not only provides job opportunities but also provides the youth a platform to interaction with different industries. It has been notice that the job fair received overwhelming response from the youths.

Observing that all the parents feel that their wards should get Government jobs which is not possible, he appealed to the youth not to run after Government jobs but to start their own enterprise and become self employed by availing the various schemes provided by the Government. The Government has started skill development courses in association with various industries, he pointed.

He further said that the labour welfare centre is catering to the needs of women folk from Sanvordem area. Sewing machines are being provided to several women and they will also be provided with work to make them financially strong.

Sanvordem MLA Pauskar said that the job fair provides valuable information regarding the different types of jobs opportunities to the unemployed youths. The Government is trying its level best to uplift the common people. He informed that the interests of the people residing in private forest or reserve forest will be protected by the Government.

He informed that a delegation of Government has gone to Delhi to meet the Central Minister and the Prime Minister to solve the problem of mining ban in Goa and expressed his hope that positive results will come from Delhi. He further said that all the seven village panchayat in Sanvordem constituency will get community halls and panchayat office buildings and playground for recreation.

Labour Commissioner, Jayant Tari said that the main objective behind organising the job fair is to provide information about employment opportunities existing in different industries. More than 2200 youths have done online registration for employment. The Government is shortlisting the candidates to provide them jobs. He appealed to the youths to show their capacity and efficiency to  companies for absorption on merit. The other intension of organising the job fair in Sanvordem area is to provide job opportunities to the youths of mining effected people. Online services will also be provided to the employers regarding the unemployed youths, he said

Regional Employment Exchange, Panaji has been selected as Model Career Centre (MCC) under the Union Government new scheme, National Career Service (NCS). NCS is a new initiative that aims to bridge the gap between job seekers and job providers through a well designed structure that comprises an ICT based portal, a country wide setup of career centres, a multilingual call centre and network of career, councillors. NCS brings job seekers, employers, councillors, trainers and placement organisation together on one platform by offering convergence of information.

The objective of this fair is to increase employment opportunities for the job seekers and offer wide range of selection to the recruiters. The State has a large pool of registered job seekers with diverse skills and educational profile. This job fair will provide an excellent opportunity to participating companies to build brand image and procure potential employees as per their requirement in key skill areas.

MLA, Shri Prasad Gaonkar and prominent industrialists were among those persons present on the occasion.