The meeting of North Goa Zilla Panchayat (ZP) was held at the Secretariat in Porvorim today. The President of North Goa Zilla Parishad, Shri Siddesh Naik presided over the meeting that deliberated on various issues pertaining to development. Administrative fund for development was a core issue discussed and members discussed how to utilise the accumulated fund of Rs. 33 crore by taking up developmental works across North Goa. The members also underscored the need to set up mechanism for using the said fund.

Members were assured at the meeting that electric fixtures that were not given during the festivity of Ganesh Chaturthi would be provided during Diwali festival. Other developmental works discussed included sewerage, drainage, constructing toilets etc.

The question pertaining to construction of North Goa Zilla Panchayat Bhavan was discussed and it was informed that there was no provision for such project. 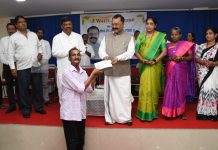 ADMISSION FOR THE POST BASIC DIPLOMA AND M.Sc NURSING PROGRAM