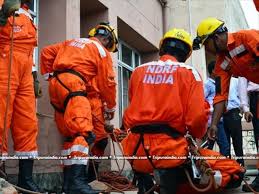 Margao: December 15, 2018 …A mock drill to assess the preparedness levels of all the response teams of the district administration, concerned industry and the surrounding industries was conducted on Thursday at the bottling plant of Bharat Petroleum Corporation at Verna Industrial Estate, Verna under the guidance of the District Magistrate and Chairperson of South Goa District Crisis Group, Dr. Tariq Thomas.

The scenario was of a gas leak at the point of Lorry Tank Unloading Gantry wherein on-site emergency tried to arrest the fire with their own resources and then declaring off site emergency.

The drill was conducted perfectly with everyone discharging their defined roles within the estimated schedule response time.  The Fire and Emergency Department with due assistance from medical teams including that of the BPCL undertook the full evacuation of the people/employees of surrounding industries too within the entire radius of 250 metres to an identified location and shifting of causalities to nearby medical centre.

Precautionary measures were undertaken by vacating the area and controlling the fire by spraying water.  The minor causalities were treated based on the severity of the injuries at the Cikitsa hospital, Verna and Hospicio Hospital while the serious injured were shifted to GMC. The surrounding industries also participated and co-operated in the entire exercise.

Shri Uday Prabhudessai, Dy. Collector(Salcete) and Incident Commander speaking at the debriefing stressed that the mock drill provides an opportunity to the line agencies and the industries in adopting the SOP’s in handling such disasters.  Identifying the strong points as well as the areas of weakness he urged the officials to improve the efficacy of the emergency response further.

Shri Prabhudessai complimenting all the officials involved in the Mock Drill for effective co-ordination of every aspect informed that the primary objective of the drill was to evaluate and check the efficacy and adequacy of resources to be required during any disaster and promptness of various response teams for further improvement in emergency preparedness systems.

Shri Nandan Sawaikar, Inspector, Factories and Boilers who was one of the observers for the drill expressed satisfaction in the conduct of the exercise.  He also pointed out areas of concern where improvement of concerned management was required based on certain situations.

Senior officials of Police, Fire & Emergency, Medical services, Collectorate besides the BPCL participated in the drill.

It may be informed that the South Goa District Crisis Group have successfully conducted such drills in four of the  8 Major Accidental Hazardous Units (MAH) in South Goa to create awareness among the residents of the locality on how to take safety measures and prepare themselves during such incidences.