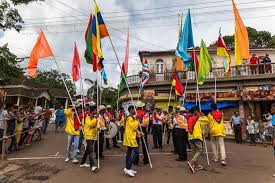 Panaji: 24th Aug, 2019….The traditional Bonderam Festival at Diwar island was celebrated with great pomp and gaiety on Saturday.

The annual festival is celebrated on the fourth Saturday of August. speaking on the occasion Minister for Arts & Culture Govind Gaude who was the chief guest for the bonderam festival said that “We are happy to promote this annual festival on the Divar Island which showcases our rich Goan history and culture. There will be colourful décor, flag parades, floats, music and revelry all over the island during this time. We welcome all tourists to experience this traditional festival.”

The name Bonderam originates from the Portuguese word ‘Bandeira’, which means flag. The otherwise laid-back island of Divar comes alive on the day of the Bonderam festival. The day begins with a flag parade from the main Divar junction, which is accompanied by a brass band. After this, the Bonderam festival is officially declared open. Later in the day there is a fancy dress competition followed by the traditional float parade and a live musical performance featuring the famous music bands of Goa.

During the Portuguese rule there were frequent disputes between the villagers on the Divar Island over property issues. Thus, the Portuguese introduced a system by putting up flags to demarcate the boundaries.