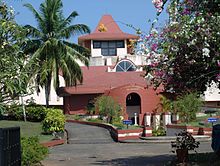 Governor and Chancellor of Goa University (GU), Shri P.S. Sreedharan Pillai presiding over the 33rd Annual Convocation of Goa University (GU) held at Durbar hall, Raj Bhavan, in Dona Paula today, said that education was not merely imparting knowledge and skills but molding tender minds into virtuous individuals who can live in harmony with all existence.

The Governor who was the Chief Guest for the ceremony further said that educational qualifications alone does not make one a good person but rather good deeds helps one get a good name. “What we learn from books is learning, while what we learn from life is wisdom,” he said while urging the students to keep the Motherland in mind and contribute to its growth and development as a token of gratitude.

Chief Minister, Dr Pramod Sawant who was Guest of Honour, graced the ceremony too.

The Governor further spoke of how the GU plans to expand the growth of mother tongue Konkani through Konkani language institutes in neighbouring states like Kerala, Karnataka etc where he said this ancient and beautiful language is spoken.

Calling the New Education Policy (NEP) 2020 a landmark document, the Governor said that it laid the foundation for New India and ‘Atma Nirbhar Bharat’. To make India ‘Atmanirbhar’, he stressed on developing an innovation-led growth model for which he said Artificial Intelligence will play a critical role in achieving this goal.

The Governor called on the students to be close to nature, considering the present scenario of global warming and climate change.

Recounting how India’s trade and economy was doing well before the British came and destroyed it, the Governor said that by hiding the fact that ancient India was the leading economic power and intellectual centre in the world, the colonizer propagated that India was backward in all fields. The Governor said that the country was celebrating ‘Azadi Ka Amrit Mahotsav’ at a time when India is recovering its roots and progressing after overcoming oppression and destruction that lasted for more than two centuries. “We have to achieve not just political freedom but as Mahatma Gandhi envisioned social and economic freedom too,” he said.

The 33rd Convocation ceremony being held after a gap of two years marked the conferment of Bachelor’s degrees on 11028 graduates, Master’s degrees on 1546 postgraduates, and the degree of Philosophy on 67 doctorates. In addition 149 received post graduate diplomas. 71 students were awarded Gold Medals, 73 students got Prizes and Scholarships of Merit.

Present on the occasion were members of Court and other bodies of GU, Deans, faculty members, Principals of colleges, recipients of degrees, award winners, parents among others.

Earlier, the Vice-Chancellor of GU, Prof. Harilal B. Menon in his welcome address said that GU endorses the Chief Minister’s assertion of working with all Industry Associations, Chambers of Commerce and corporate bodies to enhance skills of Goan students. He informed that GU under Government of India’s ‘Unnat Bharat Abhiyan’ has adopted three villages in North Goa and two villages in South Goa and has been doing activities such as marine farming initiatives that bring benefits to the residents of these areas